Four years and one day after the military shot their way through his back gate, Honduran Ex-President Mel Zelaya’s front door opened to a delegation of teachers and youth from Chicago. Members of the Chicago Teachers Union, Fearless Leading by the Youth and La Voz de los de Abajo sat for an hour with President Zelaya as well as teacher leader Yanina Parada exchanging ideas about the struggle for a world where human lives have more value than private profit. 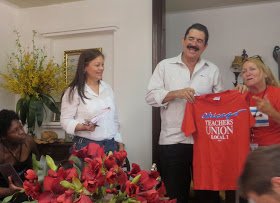 It is pursuit of that more just world that has fueled the Honduran resistance movement, unleashed by the coup d’etat four years ago. Honduran social movements have long been struggling for human rights in the face of a society where ten families control the wealth and the politicians do the bidding of the U.S. government and multinational corporations. In Mel Zelaya, they had finally found a President willing to listen. Reforms began. Accords were signed. The minimum wage was more than doubled. Honduras began to embrace the leftward shift in Latin America, joining the Bolivarian Alternative of the Americas and opening the doors to doctors from Cuba and aide from Venezuela.
As the social movements and Zelaya’s government began to work together, they decided to push for deeper changes, seeking to re-found the country and push for a new constitution. Zelaya agreed to launch a non-binding referendum about whether or not to give Hondurans the chance to vote on drafting a new constitution, a process that would take place after his presidency since Honduran presidents have only one term. The mere prospect of people having the chance to express their will about re-founding the country scared the economic elite of Honduras and their U.S.-backers so much that they planned and executed a military coup. On June 28th, 2009, the military violently kidnapped Mel Zelaya, took him to the U.S. military base Palmerola and then flew him out of the country.